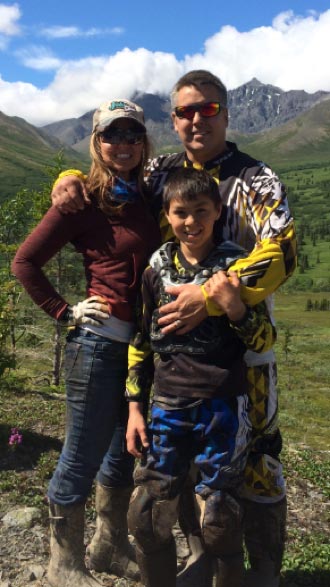 Clark “Bud” Gudmundson (Quaqsrii) was named by the late Della Keats. Raised in Kotzebue, he has a complex, important job at our Native corporation. Clark is KIC’s IT manager, responsible for overseeing and maintaining the computer and information-technology (IT) systems for KIC and all of our subsidiary companies across the country. In other words, he’s the guy who keeps our entire corporation up and running.

Clark has a somewhat surprising background for someone who works on the cutting edge of modern technology: he’s a diesel mechanic who spent 10 years at Red Dog Mine as a heavy-equipment operator. So how did a young man from Kotzebue go from diesel mechanic to head of IT for a nationwide family of companies?

Well, it’s a bit of a love story. While growing up in Kotzebue, he met a pretty girl named Danielle in third grade. Years later, as adults, they fell in love and got married. So Clark looked for a career that would enable him to stay at home with Danielle and her children. He landed a ground-level job at the hospital in Kotzebue.

“I spent my first six years in IT at Maniilaq,” Clark tells us. “I started pulling cable and hooking up computers at the help desk and worked my way up to system administration, then on to project management and, eventually, managing my own IT department. I was really fortunate. The chief information officer at the time, Eugene Smith, had a great attitude of emphasizing local hire, and he had a very good training budget.”

Today, Clark is modernizing all IT systems throughout KIC’s family of subsidiaries. “I’m working through several project plans, getting all of the IT services more up-to-date from a hardware and software perspective,” he says.

KIC and our subsidiary companies are all the same platform across the board, which means the software services are hosted at a server farm in Anchorage; but we do have several stub servers in Kotzebue and Virginia for user authentication and data replication.

“The work these companies do is a really big mix,” Clark says. “The majority of our East Coast operations is contracting on military bases, anything from construction to landscaping. The Anchorage offices are administrative. Our financial services are hosted in Anchorage, as is IT – meaning me – and our corporate offices are in Kotzebue. In addition, we have 110 rental units in Kotzebue, and equipment and vehicle rental. So all those services are hosted by us.”

So does Clark’s love story have a happy ending? It sure does. Not only is he a valuable asset to KIC, his career allows him to be a great family man and mentor to young people.

In his off-time, Clark enjoys anything outdoors he can do with Danielle and the kids, such as riding four-wheelers, dirt bikes and snow machines. He also coaches wrestling and football, as well as being involved with other youth activities. Clark is currently the wrestling coach for Mears Middle School, where his youngest son attends eighth grade, and he helps with the Ski-Jumping Club, both in Anchorage.