“These are definitely modified,” says KIC Logistics General Manager Steve Keefer. “We set three up with tracks, two with wheels. A machine with tracks will go anywhere in snow, make its own trail. It’s like having four snow machines under you.”

Powersports’ talented (and Polaris-certified) mechanics Tom Dublin, Mike Hensley and Stephen Schaeffer did the modifications here in Kotzebue. In addition to the snow tracks, they installed in each machine a Lexan divider to separate the officer in front and prisoner in the rear, a handcuff bar in back and a lockable storage unit instead of the standard open bed.

“It was pretty complicated,” Steve says. “Each machine has a winch on both ends, full cab, heaters, blue   police lights and spotlights. If an officer has to go out in the middle of the night, he can use that spotlight to look all around the machine, so it’s good for search and rescue and a number of practical applications.”

Northwest Arctic Borough requested the dimensions and options, then Powersports ordered it all, received it and did the custom work. Office Manager Lorlie Short coordinated not only ordering the machines from Polaris, but also a long list of custom parts from an East Coast company that specializes in outfitting police vehicles for off-road use.

Northwest Arctic Borough VPSO Coordinator and Public Safety Director Chris Hatch tells us, “These features enable us to provide a higher level of safety for both our officers and prisoners. When we pick up a prisoner, we’re responsible for him or her and we need to keep them safe. In addition, the VPSO rogram doesn’t just provide law enforcement services. We also provide firefighting and EMS services.

“In the past, we’ve had no place to secure things like fire extinguishers or EMS equipment or even a basic first-aid kit. The older Rangers were pretty easy to break into and had open beds, so people could just take the stuff. Now we have a secure place to carry life-saving equipment with us when we’re patrolling, which means we’re able to respond more quickly to those types of emergencies.” 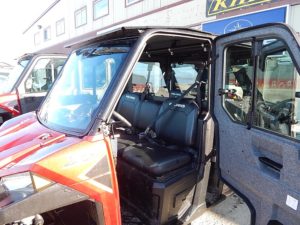 The three machines equipped with tracks will be shipped to Shugnak, Ambler and Noatak. Noorvik and Kiana will get the same vehicles, but with wheels year-round. The older machines the borough already owns will be moved into the communities of Kivalina, Buckland, Deering and Kobuk, where they will be stored in secure locations so they are available for use by VPSOs who visit in response to an incident. Placing equipment for future use in a community is essentially the same method the Alaska State Troopers use.

The borough purchased the new machines with grants obtained in partnership with Maniilaq to help equip VPSOs in our communities.

“We’ve been putting tracks on Polaris machines for a while,” says Powersports’ Keefer. “Some customers order Rangers with them on. There are maybe five to eight people in the area who have them for personal use, and they switch them – they’ll put the wheels back on in the spring. And that’s why the borough decided to get the tracked version, because they’ve been holding up so well.”

“These machines are very convenient for what we need,” the borough’s Chris Hatch adds. “Our officers will swap them back and forth. Jack it up, undo four bolts, slide the snow track off, slide the tire on, redo the four bolts. They’ve been excellent machines, and KIC has provided us with excellent service on everything we’ve bought from them over the last several years.”

The borough anticipates needing to replace the machines in the next four to five years, and will look at planning for doing so during the next grant cycle.

Thanks to the whole team at Arctic Circle Powersports.

Keep up the good work!